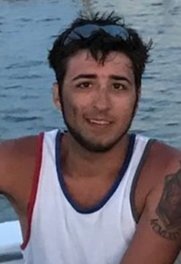 Colin is also survived by his grandparents Ralph and Carmella Juliano, grandmother Gillian Sleight, Uncle Paul Windebank, Aunt Carmie Juliano and his step brothers Corey & Colin Pumphrey of Berlin and Luke & Sean Hamburg of Cheney WA and a family of paintball friends from his own team, DarkStars, guysPicasso & Apocolypse.

Colin is now resting with  his Poppy, Edward Dobrosielski, his Grandfather Peter Sleight, Grandfather James Windebank and Abuelo & Abuela Joe and Rosa Robles, and his cousin Alexandra Cantoni of Vineland, who also passed this past February 2017 of the same disease. Colin has many, many cousins, aunts, uncles, family & friends who loved him and has supported him through his struggles.

Colin’s struggle with his addiction has been a huge challenge for him for the last few years & even though he fought his hardest, he couldn’t fight anymore.

Colin brought a special kind of energy into a room and whether you were the new 16 y/o on the field who didn’t know anyone or the professional player, like himself. His level of respect was always the same. He was a loving and compassionate boy who wanted to make his family & friends proud.

Colin had a special way about him that has touched so many. Those who knew him, know exactly what we mean. He will be missed by so many.

Family and friends may attend Colin's visitation on Saturday, November 4, 2017 from 9:30 to 12:00pm.  A Memorial Service will immediately follow.  Inurnment will be at the convenience of the of the family.