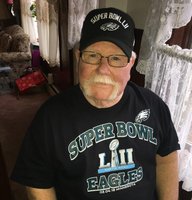 Hughes; William R. Jr. Went home to be with the Lord on June 13, 2020 age 82years , longtime resident of Clementon, NJ. Son of the late William Sr. and Eileen ( nee: Ross ). Survived by his wife Phyllis T. ( nee: DiTullio ), proud father of Michael and JoAnn Hughes, dear brother of Elizabeth Greene and Patricia Hughes, also three cherished grandchildren, Melissa Hughes, Jade Campbell, and Erik Hughes, and two precious great grandchildren, Mallory and Delaney Hughes. William will be fondly remembered by his family and friends as a genuine person with a humble mindset. Bill was very proud serving in the US Navy where he spent a lot of his career on the USS Forrestal. After the military, he began work with Siemen's Corporation, where he worked for many years. Services will be held privately and at the convenience of the family.